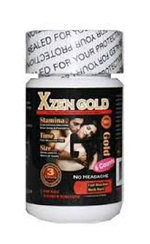 Xzen Gold is among the male enhancement products today that claim to provide the essential nutrients necessary for male reproductive function, as well as the maintenance of vital organs such as thyroid and anabolic hormone levels. It is marketed as a Viagra alternative, used an hour prior to lovemaking and poised to provide a libido boost, improved erectile quality and size, increased sexual stamina, and an effect that lasts the next three days.

The recommended dosage of Xzen Gold is 1200 milligrams, from which it derives its name Xzen 1200 Gold. This is from one capsule, consumed 60 minutes before sex and with results lasting about three to four days.

Xzen has a rather powerful combination of herbal extracts and components, thus its 1200 Gold formula that is projected to have effects lasting up to four days. This is good news if you are looking into consuming only one sexual enhancement pill in a matter of days, with benefits that will manifest for the said amount of time. However, we are wary about this strength, specifically the use of yohimbe, which can cause a handful of unwanted side effects. There is great promise in libido boost, energy enhancement, and testosterone increase in this formulation, but we would rather be working more toward safety than efficacy in every respect of the supplementation.