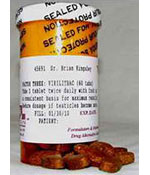 As a male enhancement product, It is said to promote virility by enhancing blood flow to erectile tissue. Unlike Viagra, which is associated with side effects like headaches, Virilitrac is not contraindicated for men who are using organic nitrates and/or heart medications. Virilitrac is a male enhancement supplement designed to help men who are unhappy with their performance in the bedroom. Bodybuilders, as well as men who have BPH or benign prostatic hyperplasia, may also benefit from taking this supplements.

Our evaluation of Virilitrac will focus on its ingredients, as well as its advertised claims.

Ingredients at a Glance

Virilitrac contains vitamins and minerals such as Vitamin B1, B2, B5, B6, Vitamin E and Zinc. It also boasts of male-enhancing components such as Tribulus Terrestris, Yohimbe bark extract, Korean ginseng root, Muira Puama, Damiana leaves and Schisandra berry extract.

Also included in the formulation (per two tablets) is 100 mg of Raw Testicular Concentrate. As the exact source of the concentrate isn’t disclosed, we would hazard a guess that it’s from an animal source.

It should be noted that the number of ingredients in a product isn’t always a help of effectiveness. Often, potency is compromised in favor of producing a multi-component product. Such is the case with this product, which has 18 ingredients but not enough Yohimbe, Tribulus, or Epimedium (absent in the formulation) to make it a complete male enhancement supplement.

The price may also be a turn-off for some consumers. At $52 for 60 capsules, men who are on the lookout for the best penis enhancer may settle for a good-enough but reasonably priced product. This is a shame because had the manufacturers justified the price tag with a credible help of effectiveness, it would be easy to convince the consumers to part with their money. Of course, with the lack of testimonials online, that goal may be harder to accomplish.