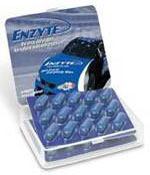 Promoted as a natural male enhancement product, Enzyte is said to increase blood flow to the penis, thereby increasing its size.  Aside from temporary enlargement of the penis, Enzyte is also marketed as an erectile dysfunction “intervention” remedy.  The commercials feature “Smilin’ Bob,” a character who always wears a smile – implying satisfaction with Enzyte’s enhancing effects.

To determine if Enzyte is effective or simply a lot of hot air behind million dollar marketing budgets we evaluated its formulation to see how the individual components fared against other more popular and better selling male enhancement products on the market.

Ingredients At A Glance

For our money, we really don’t miss Enzyte or their funny looking marketing guy. While we are encouraged that Enzyte contains Ginkgo biloba, which has flavonoid glycosides and terpenoids that are beneficial, we can’t get past the fact that many people are not able to get there money back from this company and that with those massive dollars being spent of fancy TV commercials are they really over compensating for big shortcomings in their product.  Most of the top selling male enhancement products now available rely mostly on positive word of moth marketing and seem to spend more money making great products rather than great TV commercials.

As much as we would like to give Enzyte better overview the numerous customer complaints and negative publicity are simply too many and too loud to ignore.