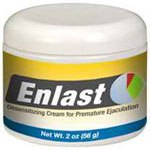 Different from other male enhancement products, Enlast is a topical medicine, which may appeal to men who are on the fence about taking oral supplements. We will list down the ingredients and see how its formulation compares to other natural penis-enhancing products in the market. This product is marketed as a sexual aid and a premature ejaculation intervention. According to the official website, Enlast “uses FDA-approved ingredients” that slow the onset of ejaculation.

Ingredients at a Glance

Muira Puama (potency wood) is the main ingredient of Enlast. Its bark and root are traditionally used in the Rio Negro area of South America as a sexual dysfunction treatment.

Another ingredient is Huanarpo Macho, which is prominently used in herbal medicine systems in Peru as an aphrodisiac and sexual tonic. There is some evidence supporting Huanarpo Macho’s mechanism of action – increasing the production of norepinephrine, which is essential in maintaining erectile function.

Enlast also contains L-arginine, a popular fitness supplement component, praised for its ability to enhance fat metabolism. It can also act as a precursor to nitric oxide, a compound that can ease blood flow into constricted extremities.

Doubtless, Enlast is an easy to use male enhancement product but does it work as well as its manufacturers claim? Yes, but the effects vary from one user to another. Ingredients such as L-arginine and Muira Puama are known to help men perform better in the bedroom. However, we are convinced that as a sexual aid, Enlast is just a lubricant, with some effects on premature ejaculation. In all honesty, it’s difficult to give glowing recommendations for a hit or miss product, when there are other products (better ones) that deliver more bang for a customer’s buck.