on Dec 11, 12 • with Comments Off on Cnidium Monnieri: Potent Herb for Erection Pills 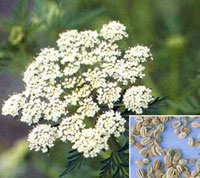 Cnidium Monnieri is a famous herb that has long been of use to traditional Chinese medicine for several thousands of years. This is the best time to take a closer and more detailed look at all the sexual benefits that Cnidium has to offer.

Cnidium Monnieri can also be referred to as Cnidium Monnier, She Chuang Dze, She Chuang, and She Chuang Zi. The plant can be abundantly found in China, Korean, Russia, Mongolia, and recently, it has also been grown in several parts of Europe and USA. This plant has close relations with carrot family and it produce seeds that are of dark yellow hue, round and have a distinguishing sweet smell.

It was way back 2,500 years ago when there was a first ever written fact about Cnidium and its benefits as reflected on the Chinese book regarding herbal potential cures authored by Shen Nong Ben Cao Jing. Its seeds are being prescribed in China for potentially curing numerous health problems. At present, the herb is being extensively used all over the world and is a very famous ingredient in some of the best herbal and natural erection pills.

Get Rock Hard Erections With Cnidium

Cnidium is not only being used for sexual health, this is being considered as a great herb for skin illnesses like red rashes, itchy skin, and eczema but now, it has become a famous aphrodisiac and is regarded as among the best. What benefits can you get out of using cnidium and how will it work to help you?

Basically, Cnidium Monnieri is considered as an overall booster of blood circulation that can help in increasing the flow of blood to all body parts which include the penis. Ingesting the herb is said to be something that can enhance the release of nitric oxide that is required in order to have enough blood amount entering the penis in order for it to stiffen. Once nitric oxide has been released, this lets the blood vessels that supply blood to the penis open enough to let extra blood volume to go to the penile tissue. It is said that the work has the similar working mechanism as that of Horny Goat Weed.

Medical tests conducted on the herb were mostly contained on the small rodents like rats and some evidences of the herb’s ability of boosting the flow of blood are not yet conclusive and further research should be carried out. For you to know if this herb will actually help you, it is a must for you to try and see for yourself. There are some men who claimed that the herb worked on them while others didn’t.